The Hadassah Foundation Awards $330,000 to Embolden Gender Justice in Israel 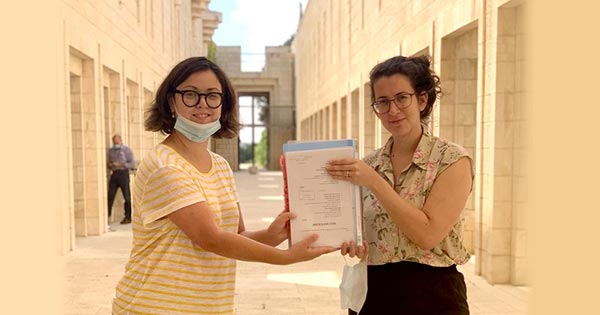 Photo: Center for Women’s Justice (CWJ) Attorney Aiya Shvartz (right) and Katya Kupchik (left) from Generation 1.5, an organization that represents Russian-speaking Israelis. The picture was taken in August 2020, after CWJ and Generation 1.5 submitted a petition to Israel’s Supreme Court, which was later granted.

The Hadassah Foundation, the largest Jewish women’s fund in the US, whose mission is to invest in social change to empower American and Israeli girls and women, is proud to announce its 2021 Israel grantees: Beit Ruth for Young Women and Girls at Risk, Center for Women’s Justice, Itach-Ma'aki: Women Lawyers for Social Justice, Women’s Spirit: Financial Independence for Women Victims of Violence, and Yozmot Atid.

“Especially at this time when the pandemic has deepened the challenges for women,” comments Foundation Chair Sue Beller, “The Hadassah Foundation is proud to support these five stellar organizations that lead the charge to eradicate systemic biases against women and girls of all backgrounds in Israel.”

Beit Ruth for Young Women and Girls at Risk is a residential school for girls who have been removed from their homes because of abuse or neglect. Its mission is to ensure that these at-risk girls have the opportunity to thrive emotionally, socially and academically, thereby breaking the cycle of violence for themselves and future generations of Israeli children. Beit Ruth received a grant for its Advocacy and Outreach Initiative to leverage its direct service by promoting public awareness about girls at risk and how girls suffer abuse differently from boys. Through this initiative, Beit Ruth will advocate for nondiscriminatory government policies that support girls and young women rather than perpetuate systemic bias against them.

Center for Women’s Justice defends a woman’s right to equality, dignity and justice whenever she is threatened by state-backed religious institutions. CWJ received its grant to support general operating costs. The funds will enable CWJ to initiate cutting-edge, precedent-setting litigation to fight abuse based on gender, to reframe the public discourse around the violation of women’s rights in the name of religion and to advocate against gender-biased religious legislation through the lens of women’s civil liberties. Over the next two years, CWJ intends to focus also on the rabbinic court’s dismissive attitude toward violence against women as well as discrimination against women from the former USSR.

Itach-Ma'aki: Women Lawyers for Social Justice addresses the needs of disenfranchised women— Arab and ultra-Orthodox women, single mothers, women in low-income jobs, women living in poverty and immigrants—and ensures that their voices are heard in public discourse. Itach-Ma’aki was awarded a grant for its City for All Program, through which it works with each local authority and, specifically, the local mayoral advisor for gender equality to create a multi-level consultation process on gender needs and issues. In this way, representatives from diverse groups work directly with local leaders to identify problematic areas that require action to improve gender equality.

Women’s Spirit: Financial Independence for Women Survivors of Violence strives to achieve justice and social change for survivors of violence, and to help survivors rebuild their lives with a long-term and personally tailored solution to improve their financial status. Women’s Spirit received a grant to support its Breaking the Bind initiative, through which it will advocate for change in Israel’s laws and policies that undermine and weaken women survivors of violence. Its aim is to be a catalyst for raising public awareness about the financial issues that trap women in a cycle of violence and poverty and to promote legal recognition of economic violence as an offense that can—and should— be prosecuted.

Yozmot Atid aims to bring entrepreneurship to low-income women earners in the Israeli marketplace. The organization helps women from disadvantaged backgrounds to escape the difficulties of underemployment and to achieve economic independence by turning their passions into viable businesses. Yozmot Atid was awarded funds by the Foundation to launch two new initiatives, targeting two particular groups: Yozmot Atid program alumnae whose businesses are in jeopardy as a result of the COVID-19 pandemic, and new participants who stand the most to gain from opening a small business.

Co-chair of Israel Grants Audrey Weiner relates, “We are so proud and pleased to partner with these strong organizations and are confident that their work, especially their advocacy and educational approaches, will have a positive impact on the lives of women and girls.”

Co-chair of Israel Grants Tracey Spiegelman comments, “The Israel Grants committee of The Hadassah Foundation has once again demonstrated a commitment to improving the status of women in Israel by funding these incredible organizations, who address issues of financial independence, economic empowerment, legal inequities, breaking the cycle of violence and representation in the political sphere. Having received over 115 grant requests, The Hadassah Foundation considered each and every proposal, and is proud to have selected these grantees who are best positioned to create impact.”

Posted by Stephanie Blumenkranz at 3:50 PM