To date, 70 percent of Jewish communal organizational professionals are women, yet women only comprise 30 percent of the top leadership positions. This statistic needs to be changed now, as an estimated 75-90 percent of the nation’s roughly 10,000 Jewish organizations will require new leaders within the next five years.

That is why The Hadassah Foundation is supporting JWI’s pilot initiative, the Jewish Communal Women’s Leadership Project, which clears the path for senior-level professional women to ascend to top executive positions in the Jewish community.

In addition to career-building tactics, the project focuses on ways to change the entire field of Jewish communal organizations with safe and equitable workplaces. Emphasis is also placed on ways to effectively mentor  the next generation of women leaders.

I consider myself very fortunate to be a part of the JWI Leadership Project cohort. It’s like being gifted a lifetime of career and personal mentorship in the space of a year...I am pleased to share that I advocated for a raise after the first session and was successful! The confidence and skills came directly from the leadership project.

-Michelle Malet, Program Participant and Director of Development
at the Capital Jewish Museum in Washington, DC.
Help women obtain top leadership positions by making
a contribution to the Hadassah Foundation today!
Posted by Stephanie Blumenkranz at 11:44 AM No comments: 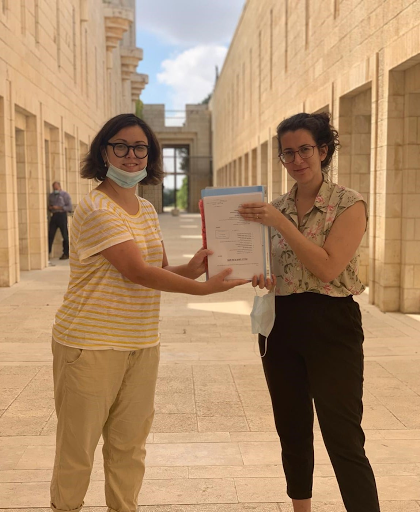 One of CWJ's client's, who will be called Yulia, was unable to obtain a Jewish divorce (a get) and she was declared by the rabbinic court as non-Jewish. This declaration was based on an outburst from Yulia's vengeful husband during divorce proceedings. Yulia arrived in Israel from the Soviet Union over 30 years ago and her Jewishness was confirmed upon her arrival.

The rabbinic court's declaration meant that Yulia was caught in an impossible legal bind. She could never: Separate her legal status from her husband, remarry, receive financial support from her spouse, or receive single parent benefits.

In August 2020, CWJ submitted a petition to the Israel Supreme Court. The petition garnered press coverage and outrage from the public. Two weeks later, the rabbinic court decided to release the divorce certificate they had been withholding for two years.

CWJ makes sure the public does not look away from injustice. With The Hadassah Foundation's support, CWJ is turning Israel into the robust, Jewish democracy it is meant to be.

Posted by Stephanie Blumenkranz at 12:11 PM No comments: