For the last several years, the Hadassah Foundation has partnered with the Lookstein Virtual Jewish Academy (LJVA), which provides online learning to Jewish students around the globe--to-date, they have served about 2000 students in day schools, synagogue schools, and public schools in five countries!  This cutting-edge organization, which is transforming how Jewish education is taught, has been featured several times in the annual Slingshot Fund guide, which highlights especially innovative projects in the Jewish community.

For two years, the HF supported the design and piloting of a new LJVA course for high-school age girls: In Their Footsteps: Women's Leadership in the Bible and Today.   Students study Biblical texts about female leaders to explore different conceptions of leadership, and then complete a social action project.  Last year, the HF supported the inclusion of a mentoring component, which enabled the course participants to interact with an adult in their home community in addition to their virtual classmates and teacher.

Although Lookstein has been pleased with the progress of In Their Footsteps, they came to an important realization as they implemented the program: gender norms about leadership are "baked in" from a very young age.  By the time a children reaches high school--the point at which most Jewish leadership programs begin--young people have already formulated notions about leadership that are often based on the stereotypes they witness firsthand. In fact, recent studies indicate that American teenagers hold significant gender biases, particularly about women in powerful leadership positions.

To address this problem, and to create a new narrative about leadership--and, in particular, female leadership--for young people, they sought the HF's support for a new program: Leadership Lab, a gender-sensitive online course for 7th and 8th grader students of both sexes that develops age-appropriate leadership competencies, including advocacy and activism, research and strategy, communication, and collaboration.

In the first part of the program, youth will examine the live and work of Jewish women leaders who have led organizations, countries, and movements. Because all the leaders studied will be women, these females will become role models and points of reference for participants, thus helping to counter gender biases in the Jewish community.  The second part of the course will offer an opportunity to apply what they learn: the course will culminate with a multi-week simulation of a fictional "Universal Jewish Congress." Students will play the roles of junior representatives, and as such be assigned to task forces and committees. They will be required to research, debate with peers, work on proposals collaboratively, and vote on real-life issues that affect the Jewish community, including those related to gender (for example, compensation in Jewish non-profits.)


To give students explicit skill targets, a deeper understanding of their leadership trajectory, and to ensure that students have the freedom to grow at their own pace and in their own way, the students will be able to earn "badges" as they complete course tasks (like assignments) that will enable them to gain competency in different leadership skills.

We are excited that through this program, LVJA will help rewrite the narrative for young people about what it means to be a powerful Jewish woman and leader!

Posted by Stephanie Blumenkranz at 1:54 PM No comments: 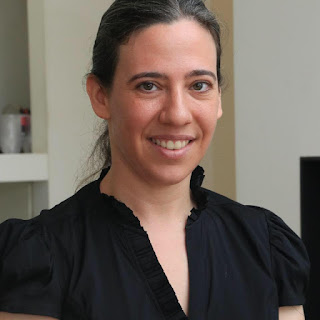 The Hadassah Foundation has awarded the 2018 Bernice S. Tannenbaum Prize to Michal Gera Margaliot, Executive Director of the Israel Women's Network (IWN) in Tel Aviv. The Bernice S. Tannenbaum Prize recognizes emerging professionals who have made innovative contributions to advance the status of women and girls in Israel and the United States. Awardees demonstrate a high degree of talent, commitment, and accomplishment in their work. The prize honors Bernice S. Tannenbaum, z''l, for her lifetime of service to the Jewish People; the State of Israel; and Hadassah, the Women's Zionist Organization of America.

Margaliot, pictured above, was awarded the prize for her work with IWN, where, as executive director since 2016, she has significantly increased the organization's media presence and influenced public debate about the status of women in Israeli society. Under her leadership, the IWN has established a network for the different feminist groups in Israel, forged numerous partnerships with governmental agencies, created a hotline that provides legal aid to ultra-Orthodox working women, and advocated for feminist employment policies and practices.

Earlier in her career, Margaliot was the parliamentary advisor to Knesset Member Merav Michaeli, and served as her chief of staff when Michaeli was the opposition whip. This experience, along with her LL.B and LL.M from the Hebrew University in Jerusalem, has enabled her to expand IWN's advancement of policy and legislation in the Knesset and in government ministries.

"I am humbled and honored to be recognized by a veteran and leading organization, the Hadassah Foundation, and in honor of a woman like Bernice Tannenbaum," said Margaliot. "Having the Hadassah Foundation recognize the work we are doing in Israel is most important for us, as we face constant attacks on women rights through gender segregation and exclusion of women from public spheres. Our long partnership is truly empowering and allows us to continue striving and fighting for equality for all women in Israel."

Established in 1984, the Israel Women's Network (IWN) is a nonpartisan civil society organization working to advance the status of women in Israel by promoting equality and diversity via a range of innovative projects and programs that target change on a policy level. The IWN is responsible for some of the most prominent and precedent-setting gains towards women's equality in Israel over the years, including: admittance of women into the Israel's Air Force; enforcing women's representation in public companies' directorates; updating sexual harassment laws; extending maternity leave for working mothers; delaying the extension of women's retirement age; establishing a National Committee for the Advancement of Women in the Israeli Knesset; and an Israeli Supreme Court decision that shifted the burden of proof from employee to employer in wage-gap discrimination cases.

"Michal Gera Margaliot is an outstanding leader in the Israeli feminist movement," said Julie Morris, chair of the Hadassah Foundation.  "We are excited to honor her achievements to-date, and feel she has the potential to have an even greater impact on Israeli society."

The Prize provides $500 in general operating support to the IWN, as well as $2,500 to further Margaliot's professional development.  Margaliot will use her Prize to fund her communication skills to increase the visibility of the IWN and the status of Israeli women to a non-Israeli public and the English-speaking media.

Posted by Stephanie Blumenkranz at 2:14 PM No comments:

A Win for Israeli Women in Israel's Rabbinic Court System

The Rackman Center, a Foundation grantee, has won a two-year old battle against Israel's rabbinic court system. Thanks to the efforts of the Rackman Center, a woman was appointed to serve as a judicial assistant in an Israeli rabbinic court — one of the most senior positions in the Orthodox-run court system.
Shira Ben-Eli was appointed to her position on the Jerusalem District Labor Court earlier this month. In this role, she will have close contact with the court's decision making process.
Nearly two years ago, the Rackman Center filed a lawsuit against the Civil Service Commission and the rabbinical courts administration, calling for equality in Israel's rabbinical courts, particularly for non-rabbinic positions.  As a result of their suit, the requirement that a judicial assistant have [Orthodox] rabbinic ordination or qualification as a dayan, a rabbinic judge--both of which are limited to men in Israel--ultimately was lifted.
Read more about the victory here.
Posted by Stephanie Blumenkranz at 2:55 PM No comments: