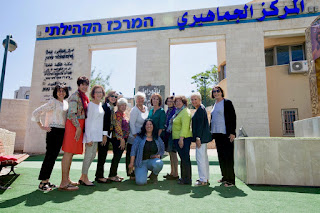 The Tishreen Association, which works with youth and women in the southern Triangle region of Israel, is opening up a world of opportunity for Arab-Israeli women who are participating in the Foundation-funded Women's Economic Empowerment program.

The Triangle--a concentration of Israeli-Arab towns in the central part of the state—is not far, as the crow flies, from several major population centers. But for many residents of these town, and in particular, for the women, these cities, and the economic opportunities that they offer, might as well be on another continent.  Many of these women have never worked outside the home, due to family obligations, local cultural norms, and poor public transportation. In addition, many lack the Hebrew language skills that are necessary for employment.  To compound matters, local opportunities for jobs are quite limited—the area, which has a poor educational infrastructure and a high crime rate, also has one of the highest unemployment rates in the country.

For the past two years, the Hadassah Foundation has supported Tishreen's efforts (in partnership with Naamat, the largest women's organization in Israel) to provide job-readiness skills, basic computer skills, and Hebrew language instruction to local women. They also place the women in jobs—including as cashiers, cleaners and day care workers—in both Arab-Israeli and Jewish-Israeli towns.  Graduates of the program remain connected and supported via an employment club, which includes those seeking jobs as well as those who have already been placed.

When the Hadassah Foundation visited the program last year (pictured above), Board members were moved by the first-hand testimonies of women who said that the program provided them with a sense of agency and hope for a better future.

In an evaluation of the program, one of the participants told Tishreen:  "This course it is the best thing that has happened to us.  We are productive and we, and those in our lives, notice that we are gradually developing and becoming more capable."

Posted by Stephanie Blumenkranz at 12:14 PM