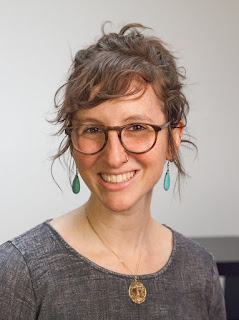 The Hadassah Foundation has awarded the 2017 Bernice S. Tannenbaum Prize to Stephanie Goldfarb, program director for youth philanthropy and leadership at the Jewish United Fund/Jewish Federation of Metropolitan Chicago.

The Bernice S. Tannenbaum Prize recognizes emerging professionals who have made innovative contributions to advance the status of women and girls in Israel and the United States. Awardees demonstrate a high degree of talent, commitment, and accomplishment in their work. The prize honors Bernice S. Tannenbaum, z''l, for her lifetime of service to the Jewish People; the State of Israel; and Hadassah, the Women's Zionist Organization of America.

Goldfarb, pictured above, was awarded the prize for her work with the JUF's programs for Chicago-area youth. During her seven years at the JUF, she has expanded a philanthropy program for Jewish teens that awards more than $50,000 annually to local nonprofits, and brought an innovative feminist-research training internship program for Jewish girls to the Chicago region. That latter program, the Research Training Internship program, has received funding from the Hadassah Foundation.

"As the newest Bernice S. Tannenbaum Prize winner, I not only feel a sense of unity with the women who recognized my commitment to social change for Jewish women and girls, I also feel as though I have an army of forward-thinking sisters behind me, pushing me to continue growing personally and professionally," said Goldfarb.

"Stephanie Goldfarb is a talented, charismatic, educator, filled with talent and passion," said Julie Morris, chair of the Foundation. "Bernice Tannenbaum would be so proud of the Foundation's selection."

The Prize provides $500 in general operating support to the JUF, as well as $2,500 to further Goldfarb's professional development.

In addition to her work for the JUF, Goldfarb serves as a resource to other community organizations serving teens. She has run "philanthropy boot camps" at summer camps and for BBYO programs serving Jewish youth, "taste of philanthropy" programs at congregations, and provided trainings for other Jewish professionals about philanthropy, LGBTQ issues, and experiential Jewish education.  She has also run programs on Jewish cooking, which takes advantage of her experience as an award-winning chef who has appeared on multiple Food Network shows.

Posted by Stephanie Blumenkranz at 12:34 PM