We are so excited to announced that in honor of our Chai (18th) Year of grant making, the Hadassah Foundation is conducting two contests--an essay and video competition--for high school students!

We've had 18 years to demonstrate what it means to be a Jewish feminist via our grant making, and we want to encourage the next generation to take their identities as Jewish feminists seriously, too!  So we are seeking submissions--no more than 500-600 words or one minute of video in length--that address one of the following set of questions:

1) What are your aspirations as a female Jewish leader in your community?  How do you want to change or add to the world?   OR
2) Which Jewish female leader, past or present, inspires you, and why? How has she influenced your dreams and aspirations?

The essay contest winner will have a one-on-one meeting via phone or videoconference with Anita Diamant, author of "The Red Tent," several guides to Jewish practice, and the New York Times best-seller, "The Boston Girl;" and the winner's work may also be published in Hadassah Magazine.


The video contest winner will have an opportunity to have a one-on-one meeting with Amanda Lipitz, a Tony Award Broadway producer and documentary filmmaker, via telephone or videoconference; and the winner's work may also be featured on the Hadassah Foundation's web site and/or in a video about the Hadassah Foundation's Chai Year.  Ms. Lipitz served as Executive Producer and Creator of MTV's groundbreaking series Legally Blonde the Musical: The Search for Elle Woods; her documentary, STEP, was shown at the Sundance Festival and will be distributed by FOX Searchlight.
All entries must be submitted electronically, along with an official entry form, BY 5:00 PM EST MONDAY, JULY 10, 2017.

A copy of the guidelines, and the entry form, can be downloaded here.
Posted by Stephanie Blumenkranz at 10:46 AM No comments:

All Good Things Come to an End.... 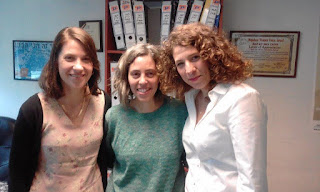 Our final day of the Mission last week included visits to two grantees.  First up was the Rackman Center at Bar-Ilan University, where we learned about their efforts to help women who are trying to secure a get, a Jewish religious divorce. They also told us about their efforts to help ultra-Orthodox women secure their place on the ballot--Ultra-Orthodox parties normally do not let women run as candidates.  Our last visit of the trip was to Kav LaOved, whose staff, pictured above, are helping migrant women who work as caretakers to elderly and disabled Israelis.  About 80% of these workers are female, and many work 24/7 under very difficult conditions.
Posted by Stephanie Blumenkranz at 10:29 AM No comments:

Eating our Way through a Druze Village 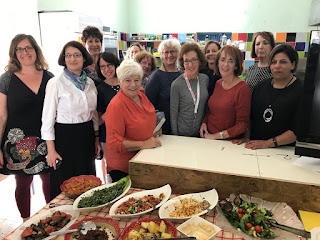 On our way back from Haifa, we stopped off in Daliat Ein Carmel, where we met a Druze woman, Hikam (far right), whose catering business is growing thanks to the support of our grantee, Economic Empowerment for Women.  EEW provides support to entrepreneurs for five years, helping them through their most difficult years. Naturally, we had to sample some of Hikam's delicious wares for lunch....

Posted by Stephanie Blumenkranz at 10:12 AM No comments: