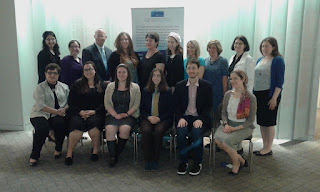 The Hadassah Foundation was proud to be a sponsor of the Shalom Hartman Institute of North America's conference last week, "Ethics, Leadership, and the Jewish Future."  The conference, which attracted more than 100 attendees, including many leading figures in the Jewish community.  The conference was part of Hartman's Created Equal Project, which includes a new curriculum that looks at the nature of leadership in the Jewish community, including the role that gender plays.  Among those attending the conference were six graduate students in Jewish communal services from schools across the country. These inaugural members of the Created Equal Graduate Students Seminar
(pictured above) have studied the Created Equal curriculum in virtual sessions over the past several months. The Foundation is currently supporting the Created Equal Project, including the program for graduate students.
Posted by Stephanie Blumenkranz at 3:25 PM