The Hadassah Foundation Awards $365,000 in Grants to Israeli Organizations

The Hadassah Foundation, which invests in social change to empower girls and women in Israel and the United States, is excited to announce it has given $365,000 in grants to 21 Israeli organizations that enhance economic opportunities for women in Israel.

The Foundation is a philanthropic pioneer in the fields of improving economic security for low-income Israeli women and developing leadership and self-esteem programs for adolescent Jewish girls and young women in the United States. Since 2000, approximately $7.1 million has been awarded to more than 80 nonprofit organizations.

Last year, the Foundation made grants totaling $450,000—it awarded $300,000 to 20 Israeli organizations which work to support Israeli women from all walks of life, as well as $150,000 to five organizations in the United States as part of its initiative to strengthen leadership development opportunities for young Jewish women.

Suzanne Offit, Chair of the Foundation, said, "We are proud to partner with such outstanding organizations that are making a real difference in the lives of Israeli women."

In addition to five first-time grantees, the Foundation also awarded "sustaining" grants for the fourth consecutive year. These grants provide general operating support to four long-term grantees that have played a particularly critical role in promoting the economic security of women in Israel.

The 2016 grants were awarded to the following organizations:

Posted by Stephanie Blumenkranz at 9:01 AM No comments:

The Center for Women's Justice (CWJ), a Foundation grantee, has won a significant victory for an Israeli woman whose status as a Jew was questioned by the rabbinical authorities.  Their client's marriage application turned into a nightmare for two generations when a District Rabbinic Court "revoked" her mother's conversion to Judaism, 29 years after the fact--thus rendering their as client non-Jewish as well, and unable to marry a fellow Jew in Israel.  CWJ appealed the decision to the High Rabbinic Court. In a hearing yesterday, CWJ successfully challenged the lower court's decision. The tribunal of High Rabbinic Court judges, headed by Rabbi David Lau, accepted CWJ's appeal and declared that the client, and her mother, were Jewish!

"Today we can smile. Sarit came into the rabbinical court as a gentile and left with her Jewish status reinstated," said CWJ attorney Nitzan Caspi-Shiloni.

Although their client's case has been resolved, the policy of investigating a convert's lifestyle when they register to marry or divorce has not changed. Continues Nitzan, "Converts may still have trouble sleeping at night out of concern that, at any time, the religious establishment can invalidate their Jewishness."
Posted by Stephanie Blumenkranz at 9:49 AM No comments: 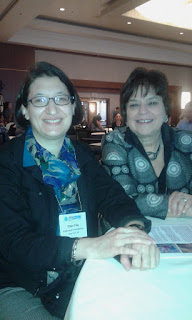 Last week, at the Jewish Funders Network, the Hadassah Foundation co-facilitated (along with Nancy Kaufman, CEO of the National Council of Jewish Women, pictured above right) a breakfast session for funders interested in girls and women.  This annual gathering attracted 450 funders and foundation professionals--including several former Foundation board members. The conference enables the Foundation to gain greater visibility for its work, network with those who may be interested in our priority areas, and learn best practices in the field of philanthropy.
Posted by Stephanie Blumenkranz at 10:38 AM No comments: