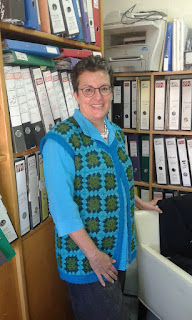 During a visit today to Center for Women's Justice, the Hadassah Foundation learned that it's Jerusalem-based grantee just had a major win. Director Susan Weiss, pictured, reported that the Israeli courts just ruled that a man who hid his business partner for 10 years (!!!) in order to help his associate evade giving a get, a Jewish religious divorce to his wife, could be held liable for his actions. The divorcing women received a settlement worth around $60,000.
They also won a judgement that enables women from all streams of Judaism in Israel to use the Orthodox-controlled ritual baths for conversion and other purposes.

Posted by Stephanie Blumenkranz at 11:59 AM