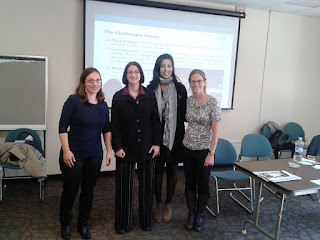 Fifteen years ago, the UN adopted Security Resolution 1325, a landmark international legal framework that addresses not only the inordinate impact of war on women, but also the pivotal role women should and do play in conflict management, conflict resolution and sustainable peace.  In 2005, Israel became the first member of the UN to create legislation based on this resolution by amending its 1951 Equality of Women's Rights Law.  Like many other measures in Israel, although a law is on the books, its implementation is another matter.

Foundation grantee Itach-Maaki has been at the forefront of efforts in Israel to create a framework by which the government will enact this measure. Between 2012--14, it convened more than 30 women's organizations, activities, and academics from different backgrounds to create an action plan that was subsequently presented to the government.  In recognition of these efforts, Itach-Maaki was asked to present at the Peace Forum to Commemorate the 15th Anniversary UNSCR 1325, an international gathering in NYC, a stone's throw from the U.N.  Pictured above is the delegation from Itach-Maaki that spoke at last week's interfaith gathering, which was sponsored by a number of women's groups from across the religious spectrum.

Posted by Stephanie Blumenkranz at 12:56 PM