AVODAH: The Jewish Service Corps, strengthens the Jewish community’s fight against the causes and effects of poverty in the United States by engaging participants in service and community building that inspire them to become lifelong leaders for social change whose work for justice is rooted in and nourished by Jewish values. 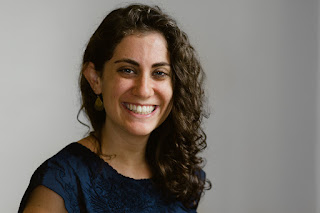 “AWLT was such a wonderful opportunity! I was given the tools, space, and guidance to take a step back from my daily grind and examine my longer-term goals. Being part of an AVODAH alum cohort added to the richness of the experience because I was able to get specific feedback from strong, career-driven women who share many of my values and interest in social change work. I often felt energized and inspired after connecting with other participants, especially my "thought and sustenance partner" with whom I had weekly check-ins to keep each accountable and engaged. I now have a "mission statement" or mantra that speaks to how and why I want to engage in the world in addition to a five-year vision statement that informs even some of my small, daily career and life choices. It feels good to have some clear direction as well as deep new connections to other AVODAH alum leaders!”

Posted by Stephanie Blumenkranz at 10:06 AM No comments:

We are excited to announce that The Hadassah Foundation has given $150,000 in grants to five American organizations that strengthen the leadership develop skills and capabilities of Jewish girls and young women.  With this latest round of grants, the Foundation has awarded a total of $450,000 to Israeli and American group in 2015, up from $360,000 awarded in 2014. Since 2000, approximately $6.8 million has been awarded to more than 80 nonprofit organizations.

This new set of grants to organizations in the United States is part of the Foundation's multi-year initiative—inaugurated last year—to strengthen leadership development opportunities for young Jewish women in the United States. Three of the 2015 grantees are receiving a renewal grant for their program, and two are first-time grantees.

"We are proud to invest in the leadership abilities of young Jewish women," said Suzanne Offit, chair of the Hadassah Foundation.  "We want to shine a bright light on the needs and capabilities of the next generation of Jewish leadership, and in particular, the specific needs of Jewish girls and young women."

Grants were awarded to the following organizations:

The JCRC's Long Island office created the Girls LEAD program, a leadership development program for Jewish, female teens from the Five Towns community.  Working in concert with the JCC of the Greater Five Towns, and the Women's Fund of Long Island, this program develops the teens' personal leadership skills, and strengthens their leadership abilities through consensus building, philanthropy and volunteerism as they learn about, and select, a local organization for a grant, and then provide hands-on service to the organization.

The JFS of San Diego's Girls Give Back program educates Jewish girls from the area about gender inequality, develops concrete leadership skills, and empowers young women to actively engage in the San Diego community through ongoing volunteer work and service learning projects.

The Rising Voices Fellowship teaches Jewish female teens in grades 10-12 how to communicate effectively about their experiences, beliefs, and challenges, and use the power of social media to spark a wider conversation about Jewish identity and gender equality among their peers and within the larger Jewish community. The program is a partnership between Jewish Women's Archive and Prozdor, a program for high school students at Hebrew College,

Created Equal: A Research and Educational Project on Men, Women and the Ethics of Leadership project, will develop a new curriculum to understand how gender influences the broader narrative of Jewish life, including contemporary questions of leadership and gender equity. The Foundation's grant will support a series of workshops and programs based on this curriculum that target emerging leaders in the Jewish community who are attending graduate school programs in Jewish communal service as well as for a one-day conference that targets key players in the Jewish community at different stages of their career.

Posted by Stephanie Blumenkranz at 2:36 PM No comments: