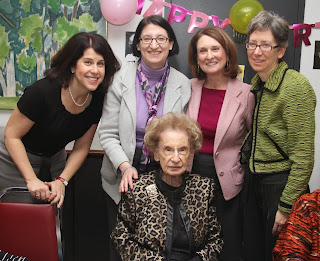 We celebrated Bernice Tannenbaum's 100th birthday at Hadassah House today!  Bernice (seated) is the former national president of Hadassah, Hadassah's liaison to the Foundation, and an all-around force of nature. Bernice, you are forever an inspiration to us!
Posted by Stephanie Blumenkranz at 3:19 PM No comments: 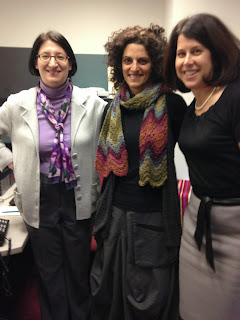 We were excited to have Samar Qudha Tannous, a lawyer at our grantee Itach-Maaki, visit our office today. Itach-Maaki is a feminist law advocacy organization based in Tel Aviv that fights for the rights of both Jewish and Arab citizens of Israel  Samar (center, above) who was in New York for a fundraiser held earlier this week by another Foundation grantee, the New Israel Fund.  Last year, thanks to a grant from the NIF, Tamar studied for her LLM at American University's College of Law.

Posted by Stephanie Blumenkranz at 3:10 PM No comments:

Yesterday, the Israeli Knesset approved a bill put forward by Foundation grantee The Rackman Center, which will raise the minimum legal marriage age in Israel to 18, up by one year from the current age of 17.

This bill is the culmination of a three-year effort initiated by the Rackman Center, under the leadership of its founding Director, Prof. Ruth-Halperin-Kaddari. A report prepared by the Center revealed that about 4,500 minors are married annually in Israel, 4,000 of whom are women. About a third of the married minors are Jewish, with the rest mostly Muslim, and approximately 500 of them are younger than 16. This new law aims to end child-marriage in Israel. If enforced properly, the law has the potential to prevent teenage girls from dropping out of school and harming their own future by marrying so young.

Equally important, the bill bans family courts from approving marriage of minors under 16 in any circumstances and removes pregnancy as a cause for approving marriage for those under 18. The new law requires all relevant government ministries to report, annually, to a special Knesset committee about the measures that have been take to enforce this law.

"The time has come to adopt this law in Israel and prevent early marriage and motherhood among women who are not ready for it either physically or mentally," said Prof. Halperin-Kaddari in lauding the Center's resounding victory. The existing law, passed over 60 years ago, is not at all compatible with the social advancement and research developments which have taken place since then. The passing of the new law is an historical moment in the women's rights struggle in Israel and I am extremely proud that the Rackman Center leads the way to this change along with some very dedicated partners in the Knesset."
Posted by Stephanie Blumenkranz at 2:49 PM No comments: